I have been worried about your husband Barack’s eating habits. From following him on the campaign trail during these very arduous times, it seems that news items abound about him chowing down on ribs, chili dogs, pizza and pastries. Yes, I know that he needs to go meet and greet his constituents and that he is eager to support small business owners around the country. This does mean that he must go and find where the people gather–and that is often in settings that involve the communal act of the serving and eating of food.

I deeply appreciate that he is of the people and can get down and chow down with the common folk. I also know he is a very generous guy and stories have reported that he is sometimes buying goodies to bring back to his hard-cranking campaign workers or public servants in the numerous locations where he has touched down.

I do not mean to undermine his profound need for nourishment to keep him going, but it seems that a lot of yellow and red light foods are speeding their way down his own gullet–with obvious gusto–and with no traffic infractions being incurred. Just for those of my readers who don’t live in the world of nutrition education, the traffic light metaphor refers to a system of identifying foods as either green, yellow or red light signifying always, sometimes or rarely ever to be eaten.

I am reminded that when Barack’s friend and mentor, former President Bill Clinton was in office, his legendary appetites were the subject of much attention and downright mockery. I remember hearing he lusted for Philly Cheese Steaks. So, why are your husband’s eating habits not garnering the same scrutiny? Unfortunately, unlike pudgy Bill, it is because he is thin–actually, it is worse than that. He is skinny. I say, unfortunately, because being skinny can sneak up and bite ya. I imagine it must have been a bit disconcerting for you when that burly pizza parlor owner, came right over and just picked poor Barack right up off the ground with that big bear hug.

With all the attention on obesity, we forget that the non-obese can suffer health consequences as well and are equally vulnerable to the effects of poor diet, smoking and stress–which I know are issues your husband contends with. These can be more detrimental than just extra pounds alone. I think I heard that he has quit smoking–so that is good.

I will assume that when at home, our dear President consumes lots of White House grown organic vegetables, and grass-fed, hormone-free animal products prepared by some of the best chefs in the land. And, that he plays basketball and does other activities to stay fit. Hopefully, he also has a team of massage therapists and other holistically-oriented practitioners to assist with his well-being. Maybe he just eats these ‘red light ‘ foods when he is on the road–like kids who go crazy for sweets at other people’s homes when such foods are forbidden in their own.

Believe you me, I do know that it is impossible to control our husbands’ behaviors. Here I am a nutritionist, and my own hubby has quite the pedestrian sweet tooth. No amount of my homemade kale chips can keep him from occasionally going out and finding a bag of Cheeze Doodles and the perfect dish of ice cream. I bet Hilary knows what I mean. Still, I am wondering, if given your highly touted platform and efforts regarding the urgency of improving nutritional status and decreasing the burden of illness on our nation, whether Barack could and should be modeling more healthful eating behaviors.

I was troubled by a story I heard on the radio just last week. NPR reported on what Obama and Romney were doing to sustain their non-stop high-energy requirements on the final leg of the campaign. This was right before Hurricane Sandy changed the agenda. They interviewed some campaign assistant who started out by saying that when Barack got off the plane that morning, he headed right over to get some Krispy Kreme doughnuts. You probably don’t know that I have a little, shall we say, vendetta against Krispy Kreme, so you may want to read my posts, Kicking Butt with Krispy Kreme and Magic Doughnuts–The Nutritionist’s Nemesis. So, upon hearing that, I was all ears.

It got worse. I was shocked to then hear Barack himself saying something to the effect that all that nutrition stuff is your thing, but he doesn’t care. It is an election year and the White House will be giving out lots of candy for Halloween. My, I don’t know how you felt about that, but I was disappointed to hear such an off the cuff remark that indicated to me a disregard of the real importance of proper nutrition in improving the health of our citizenry.

To really turn the tide on the dire consequences attributable to the Standard American Diet  (SAD) will take more than lip service. It will take courage to exhibit true leadership in this matter–and leading by example. Sugary sweets are not a substitute for the relief this electorate truly seeks, and perpetuating good-natured excuses and exceptions for our food behaviors will not reduce our massive health costs and its drain on our economy. That quick sugary fix will ultimately lead to a massive crash in mood and energy.

Never you mind. Your husband still has my vote. Yet, I am writing this with trepidation as the election is still a few days away. I do wish for him to have four more years–healthy years– in office. I hope it will not take a quadruple bypass surgery for him to appreciate and attend to the benefits of a healthful and vegan diet as it did his friend Bill. It would have been nice if while stumping in North Carolina he had stopped in at that wonderful restaurant, The Laughing Seed Cafe that I mentioned in Forks on the Road.

Though Barack might not need them, the future of health care, Medicare and Social Security are seriously on the line right now–and we need him to make sure that those programs are there for those of us who will. Perhaps too, with a second term, he can work to integrate some more holistic preventive health measures into Health Care reform. Please, keep up your good work and see if you can get Barack to eat his beets. I read that he does not like them. Do let him know that betalain-rich beets are blessed with many health benefits. Great for the cardiovascular system and the lowering of high blood pressure. And, that makes those beautiful red gems a nice little aphrodisiac food too–wink wink

P.S. Congratulations on your beautiful new book, American Grown, The Story of the White House Kitchen Garden and Gardens Across America. 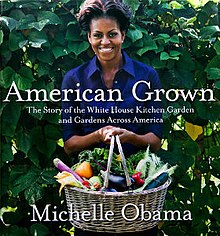 We hope we live long and strong.

12 thoughts on “michelle, my first lady”