“The public is silent when young women die.” charges Naomi Wolf, author of The Beauty Myth.

I have just returned from an annual conference that I attend on Eating Disorders. The conference, in its eleventh year, is sponsored by The Nutrition Clinic and Sol Stone (Update 2020: Upstate New York Eating Disorder Service); Clearpath Healing Arts Center; and Ophelia’s Place who work together to form a strong, sensitive and progressive treatment network in central New York. 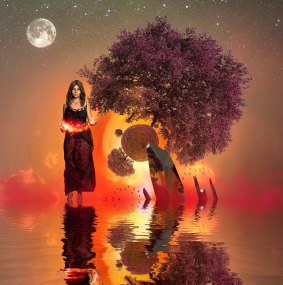 Each year, near the end of the conference, a handful of individuals in the recovery stage of their eating disorder are invited up to share some part of their story. This is, of course, the most enlightening and always most emotional part of the day. The wisdom acquired in overcoming such a strong opponent is very deep and these very intelligent women articulate it beautifully.

This day, a young woman in her mid-twenties, stood before the two hundred or more attendees and shared that in the darkest days of her eating disorder, she almost walked into traffic–but only stopped herself because she felt it would be immoral to place such a horrible burden on whoever might have killed her. To witness someone so young describe such a depth of despair was both bone-chilling and deeply heart-opening.

On some level, we know that there are people who are suffering from eating disorders, but essentially they are invisible. However, when one is privy to the stories of those who have had one of these crippling conditions; and you couple that with statistics like one in 100 individuals has an eating disorder—it is imaginable that there are truly some “walking dead” amongst us.

To offer some response to this young woman who had the courage to expose her pain and vulnerability and who has found the strength to persevere and to heal, I bring to this conversation– about the realities of eaters and eating– a discussion about eating disorders. I know that it does not do justice to the topic. It is a contorted and rather incomplete version of something I have written before. But, it seems a fitting time for me to introduce this part of the story. In honor of that woman and the four others who stood before me a few days ago, please consider the following.

We may have seen or heard about someone who is nibbling on only lettuce and carrots at mealtimes; wearing heavy clothing in moderate temperatures; exhibiting extreme weight loss; exercising excessively or appearing listless at a team practice or dance class.  But, to the inexperienced eye, even extreme physical changes or behaviors can be overlooked or ignored. We may have even encountered someone who we suspected was suffering from an eating disorder, but we did not know what to do or say.

Most definitely, we have all had dealings with eating disordered individuals whose behaviors escaped our radar screen. The very nature of eating disorders is secretive and manipulative. Average-weight or over-weight individuals may be suffering as much as their noticeably underweight counterparts; older persons as well as younger ones; and men as well as women. Compounding the issue is that in certain environments like high schools and college campuses—but in the larger world as well—there is a “culture of thinness”. In such environments, underweight individuals can appear almost normal looking. Responses to eating disorders can include, “Oh, I wish I had that problem”, or “Why don’t they just eat?”

Even when we are cognizant and concerned about eating disorders, it is impossible to consider or measure the loss of potential and achievement, the degree of nutrient deficiencies, the magnitude of depression and anxiety, the potential for long-term health problems, and the possibility of sudden death from complications or suicide that eating disorders engender.

Eating disorders tend to leave people feeling frustrated, confused and helpless. Despite this normal reaction, it is really important that our society and our public health policymakers begin to better acknowledge, support and treat those with these disorders.  Without intervention, chances for a full recovery are slim for those with severe conditions.

I have discussed my concern about the panicked way in which we are “battling” obesity.  For many, overeating is an eating disorder–as deserving of a very sensitive and holistic approach to care as does “undereating”. We have the opportunity, and perhaps the obligation, to create an environment and dialogue that challenges the attitudes that make individuals feel bad about their bodies and that feed the medium in which all eating disorders thrive.

We can only hear the wisdom of those who have confronted an eating disorder if we are very quiet. If we can move the lens away from the obesity issue and reframe the disgust we harbor about fat, we may realize there is a gentler and more important conversation to be had about feeding, eating, and nourishment.

Frances Berg writes, “Our children, our daughters, and sons, are growing up afraid to eat, afraid to gain weight, afraid to grow and mature in normal ways. They are desperate to have the right bodies, obsessed with the need to be thin and fearful they won’t be loved until they reach perfection. This is the point to which our weight-obsessed culture has brought us. Our children are innocent victims.”

Related Posts: Dolls with Faith, Muse of the Girl, Nourish Thyself Well Day, A Meteorological Change of Plans, Size Me Down