Last week was a rather discouraging one for this persevering nutritionist. I knew it was bad, as on Friday I found myself contemplating stopping at a Dunkin’ Donuts and just drowning myself in one of those massive confectionery pond-sized drinks, weighted down with heavy donut shoes.

The final straw so to speak had occurred just moments before. On Fridays, I work in some elementary schools. As I was packing up my Mary Poppins basket musing on the students I had spent my day with, an announcement came over the loud-speaker. The principal was congratulating a boy for his lack of tardiness or absenteeism for the month of February. His reward was that he’d get to share a Burger King lunch with her.

Really? Why don’t you just shoot me in the foot? Well, maybe this boy was being given his fair reward. All the other slackers who had managed to show up on this day got a greasy, square piece of pizza, a cellophane-wrapped bag of carrots (which is more appealing than most of the veggie offerings) a blob of half-frozen mushy blueberries–the ice crystals were visible– and a chocolate milk on their non-recyclable styrofoam tray. That should teach them not to miss school.

The night before I had been at a charter elementary school. I was a presenter with two other speakers on healthy choices for school success. I had been excited that the school had focused a parent meeting on this important topic and was glad to have been invited. Despite good intentions on behalf of the school, only six parents out of a student body of 300 attended. Still, we did our thing.

Out of my Mary Poppins basket, I  passed around, along with some other nutrition shockers, a well-worn packet of Pop-Tarts with an attached baggie filled with the eight and a quarter teaspoons of sugar that it contains. I asked the participants to look at the long list of gruesome ingredients as I talked about nutrition and brain health. After the talk, a staff person approached me. She meekly told me, that if kids get to school late, and miss the provided breakfast, they are given Pop-Tarts. Given the rewarding of non-tardy behavior to only one recipient at the other school, I surmise that no small number of kids are getting their brains doused with such artificial intelligence here. I felt like I was going to cry.  (We did come up with some alternative ideas for the school though.)

Oh well, no biggie. Maybe I was just sensitive because the day before that I had a new eating disordered client who was restricting herself to three hundred calories a day. Or, maybe it was the young diabetic who I had spent many teaching moments with, who came in the day before that with a high blood sugar of 227 and told me that she had a beef patty, some Pringle-like potato chip I had never heard of, three Oreos and a large-sized can of Arizona Green Tea for breakfast.

Perhaps, most disheartening though was the doctor who totally ignored my concerns about the severe dietary deficiencies of a patient we shared–whose support I really needed to facilitate her care. Like the scenarios I described above, this is really nothing new to me. Doctors untrained in nutrition, give short shrift to diet, except for some lip service when it comes to blood pressure, weight, and cholesterol. I am rather used to being ignored by physicians.

I do not expect my clients, my students, and even school administrators to fully get this whole food and nutrition thing given current conditions. Those with eating struggles would not have them if they were easily understood. Individual schools are not easily able to remedy foodservice  and budget limitations. Teachers have many other matters to attend to.

But, I do really expect that by now, even conventionally-trained medical providers would appreciate the connection between diet and health and would give attention to meaningful dietary assessments in supporting the treatment of their patients. It is recognized that patients whose doctors inquire about their smoking habits and are told to quit have higher smoking cessation success. To help turn the tide on the nation’s health crisis, doctors’ true embracing of dietary health is essential. Last week, I really needed that doctor to express to our patient who was in the office, concern about her eating and to provide to her some basic nutritional support. Instead, out the door, the patient went, with a prescription for one more drug in hand and no mention of my recommendations. I slumped in my chair.

Usually, I can handle situations like this with more aplomb. Maybe I am just a bit depleted in B-vitamins which lowered my resilience. Never mind. Time to re-fortify. Onward.

Why are the birds at my feeder giving me attitude about the milo, millet, cracked seed with oil sunflower seed food, squawking that they will only eat plain oil sunflower seed? Picky, picky, juvenile, ungrateful little peckers. Sure, I’ll get out the ladder in the freezing cold and go change it–which I did.

Chico, the cat, is never satisfied. How can it be that after so many years together, his humans cannot understand his hearty appetites and food preferences? Why must he always settle for such mundane fare as cat food? He knows that I know he enjoys cantaloupe served diced on a plate at the table, so what’s up with this dry crap in the cracked bowl on the floor?

Last week, after our usual morning argument about breakfast, I left the kitchen in a huff, saying, sorry, Chico, this is not a restaurant, and that is what I am serving today. He followed me into the living room, and as I bent over to put my shoes on, he head-butted me in the butt. Lucky for him he is the most amazing, adorable and hysterical cat in the world. 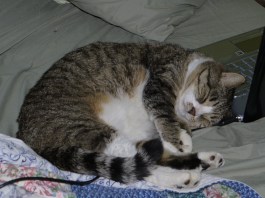 Luna, the other cat, will only drink out of the bathroom sink. A trip to the toilet is never a solitary experience. If you’ve not tripped over her as she comes careening out of nowhere to leap onto the sink from the toilet bowl, you must then negotiate the faucet flow, your own flow, and the toilet paper roll, all simultaneously as she tends to her hydration.

My daughter scoffs at the most important meal of the day and today, I watched as my dear husband tried to mix his whey protein powder into his bowl of oatmeal–trying to kill two dietary imperatives with one spoon. Why must this all be so difficult?

Meanwhile, the fire belly newt, Everest, that we have had for nine years is without complaint, happily chowing down on his Freshwater Flakes from the first and only 2.2-ounce container that we ever bought. I am trying to read from the label but some of it has already faded. It contains a natural something or other formula and is made ONLY with Fresh Seafood. Seriously, he is only two-thirds through this small canister–in nine years! The price sticker is still on it. The bottle cost $5.89. Every few days I say, “Oh, the newt!”, and sprinkle a few flakes into his grungy tank. Don’t misread this. He and I have a very special bond. Today as a treat, I gave him a couple of Newt and Salamander Bites. My he loves those. That 1.2 oz container is only half empty and says on the label–soft sinking pellet diet.

There is just so much meowing, barking, whining, chirping, oinking, mooing, hissing and howling going on these days about all this food and eating stuff. Can’t all species just get over it and agree to this simple amphibian flake and pellet diet?

Ah, well. Time to go make myself some lunch. Please comment if you love Chico (he does have quite the following) or any other finicky mammal.