The week of Halloween is usually the busiest one of the year for me. I have described before the antics of my next-door neighbors, Amy and Eric, and the going-ons in my little village. But this year things were truly larger than life with the celebration of the Day of the Dead and all whom that invites. So, this past week was crazier than usual with many attendant dilemmas.

It all started out with my fire belly newt. I wrote about Everest, a few years back in Feeding Things. Recently, Everest has not been doing well. He became quite bloated and was eating less and moving less than even usual. After thirteen years with us, I thought maybe his time had come. On several occasions, I declared and bemoaned with certainty that he was dead, and each time I did, he’d surprise me by appearing in a different part of his tank. I was actually pretty upset because thirteen years with anything, including a pretty little amphibian involves some emotional attachment. But, what was I to do? 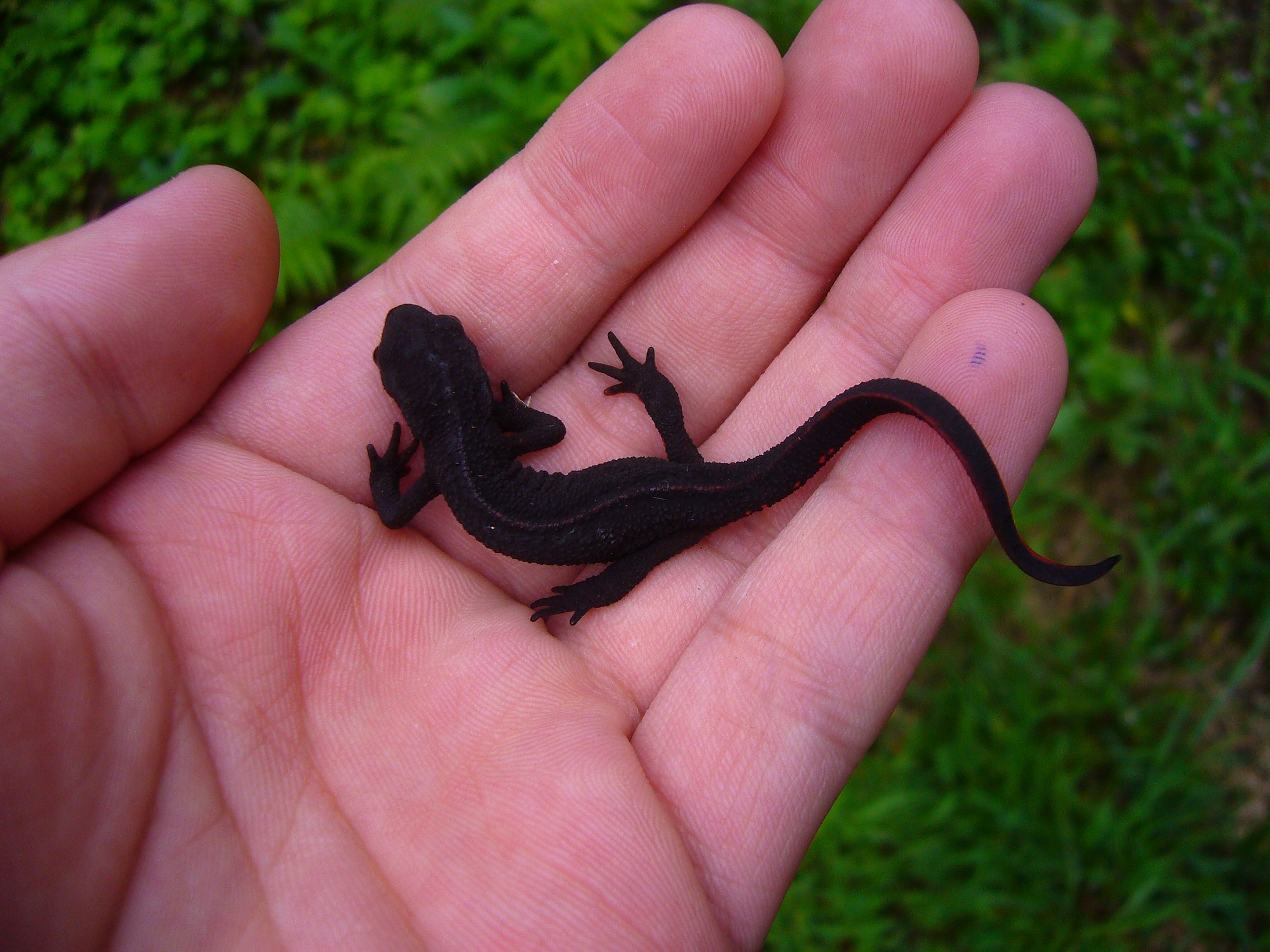 Zena intervened by finding a nearby reptile and amphibian veterinarian. Yikes! Just when I thought I should let nature take its course, I found myself at the beginning of the week, on Zena’s birthday, at the vet. I figured I should do it for her and besides, the newt had never needed much of anything before. It was her wish to get a newt when she was in first grade, and here she was in college, asking me to please do something. Well, that was a rather surreal experience. They brought in big heat lamps, and that vet whisked dear Everest up out of his tank for a full physical examination. His eyes were declared clear, his will forces strong–as he would not open his mouth, but his prognosis poor.

Though I was anxious to get home to get ready for Zena’s birthday dinner, I waited as a few remedies were prescribed including a highly nutritious food powder that I need just mix with water and get down his throat. I drove home wondering if I had done the right thing. But, I knew this was going to be a crazy week with lots happening, so I set Everest up in a new spot with a new light, and decided to accept whatever was to be without much more intervention. Still, I was aware that it was interesting that my newt story was transpiring just in time for Halloween. Even Leah’s Cakery, the incredible bakery (and more) in the village was serving up Eye of the Newt Soup in the spirit of the upcoming holiday.

We had a lovely dinner with Zena, but that was just the beginning. When you live next door to people whose Halloween display is so elaborate that the mayor decrees that the street gets blocked off, you cannot just sit by and do nothing. None of that, “Oh, no, we don’t get many trick-or-treaters.” Only the pressure I feel to impress the “Joneses” by making some humble effort to make my house look spooky–one year it was a little Snoopy cut out that said “BOO”–allows me to preoccupy myself and forget that this holiday is a nutritionist’s nightmare.

I did not go and buy any candy, but neither did I have time to go figure out a substitute. Last year I gave out little adorable fruit and vegetable stickers (big hit) but this year my source was dried up. I dragged a huge tree limb out of the woods for my Edgar Allen Poe inspired decorative theme, I dug out the pumpkin and skull lights, I found the stuffed crows and owls and, I went in search of pumpkins–which are hard to come by when you wait till the end. Then mid-week, I remembered it was my turn to be the birthday “bunny” at work which means I had to prepare a little celebration for the person whose birthday it was in my unit, which in this case turned out to be my boss. That involved some agita and concern whether my low sugar baking would be enough to impress.

In the midst of this, I did try to go find something to humor the little children enough that they wouldn’t notice that they were not receiving any candy. I arrived at a local dollar store only to find that they were closing in a few days and that the shelves were pretty bare. However, I managed to gather up a few packs of some type of crayon markers–and a new cat poop scooper.

When Pete arrived home from being out-of-town, he found the measly amount of markers in a box by the door. He looked at me and said he would go buy some candy. Still, even what you think might be enough is never enough and always exceeds what my conscience can abide.

Friday morning, Halloween Day arrived. Though I had wedged the big tree limb onto my porch, there was still some decorating to do. And, while the pumpkins had been eviscerated, they still needed to be carved. On top of everything, the next day was Pete’s birthday, and I hoped to celebrate it with the guests who were coming for Halloween which included Zena and some of her college friends, and Pete’s sister and brother-in-law.

I checked on the newt. Amazingly as the days had passed his bloating had decreased and he seemed a little more active than he had in weeks. I looked him in the eye and wished him a Happy Halloween. He gave me a little wink. Heading out to work, I ran into Leah’s. Leah is truly a wizardess and had conjured up the most adorable little Halloween chocolate cakes. I described the situation and she magically added the words Happy Birthday above the frosting skeleton.

I got to work and begged for a slightly early release, which was granted. I raced home. My street was blocked with those orange cones reminding me that I could not even park in front of my house. The clock was ticking as I walked over from where I was able to leave my car, carrying the cake and finalizing my game plan. The little kiddies would start arriving any minute. I put up the butternut squash, sweet potato and pumpkin soup in the cauldron, my witches beta-carotene brew antidote for too much candy. I stood above the pumpkins, wielded a knife and recited the spell for quick inspiration for carving ideas. And, I stuck Zena’s stuffed sloth as the final touch on the tree limb. I responded to the first rings of the doorbell and ran outside to watch as the first visitors took in the wonder of it all. Pete then arrived home, just in time to become the official greeter and dispenser while I hung back in the kitchen. The onslaught was intense.

So, here is this year’s report from the field. As the monsters, princesses, zombies, pirates, dice, skeletons and lions arrived at the door, the orifices of their candy collecting devices agape, Pete asked, “Which would you prefer?” “You can either have some chocolate or candy just like at every other house, OR, you can have some (state of the art) markers.” Well, though I am not sure the survey would meet the rigors of the scientific method, the results suggest about a thirty percent response rate for the markers. Really! Amid the din of shrieks for chocolate, I heard, “Wow! Markers are great! I love markers. Yeah, cool, thanks.” In fact, the response rate was so high that we had to start breaking down the four packs and handing out individual ones. That was just about the time that we ran out of candy too. Emergency measures were put in place temporarily until the situation could be resolved–which was when I ran to my other neighbor, Carrie Woerner who is running for State Assembly, and she handed over to me some of her reserves.

So, along with the spirits, many questions floated in the air. What is it that we are truly seeking and craving? What other tokens of love and fun can we share? When is enough enough? When do we saturate? What are the deeper implications? And, should you force-feed a newt?

Well, maybe I am a party pooper (and a kitty poop scooper) but it is complicated. When the night finally quieted down and the goblins returned to their homes, Pete and I wandered over to Amy and Eric’s to see how they were doing. The candy quandary question arose. Amy, always creative even when utterly exhausted gave me an idea. Next year, I will honor the holiday by giving out some nice little bags of herbs tied up with a sweet little greeting. Perhaps some chamomile, yarrow or mugwort. Ah, yes–mugwort. The makings of a gentle potion to put the children peacefully to sleep. No sugar crash and good for parents too.

Oh, well. It’s over. The squirrels have already eaten away at the pumpkins, the newt is still alive, and tomorrow is Election Day. If you live in my district, please vote for Carrie!

What’s with my tummy

One thought on “eye of the newt–the halloween report”