I really wish I didn’t have to write about this. Other more pressing issues in my brain are asking to be brought forward. However, it was another day in the schools for me, and checking out the cafeteria scene has become one of my pastimes. Here is what I stumbled upon today that I just can’t readily dismiss.

As usual, I approached the lunch line as the little kiddies were lining up, trays in hand.  The black styrofoam mystery boxes stood in formation on the big metal trays coming out of the warmers. I approached the lunch ladies with my pseudo-smile and asked–So what’s for lunch today? The response was, it is not lunch, it is brunch. I was a little taken aback. I admit it was one of the earlier lunch periods, but a quick glance at my surroundings confirmed that this was not Sunday morning at The Four Seasons.

I backed off and decided to see what the kids could tell me. I positioned myself near the little machine where they punch in their assigned lunch number, and then grab their chocolate milk container from the insulated fabric cooler. Really, Jamie Oliver, the cooler carried fifty containers of chocolate milk and two of white, plain, unflavored milk. (I am never sure what is the politically correct name for that milk. ) 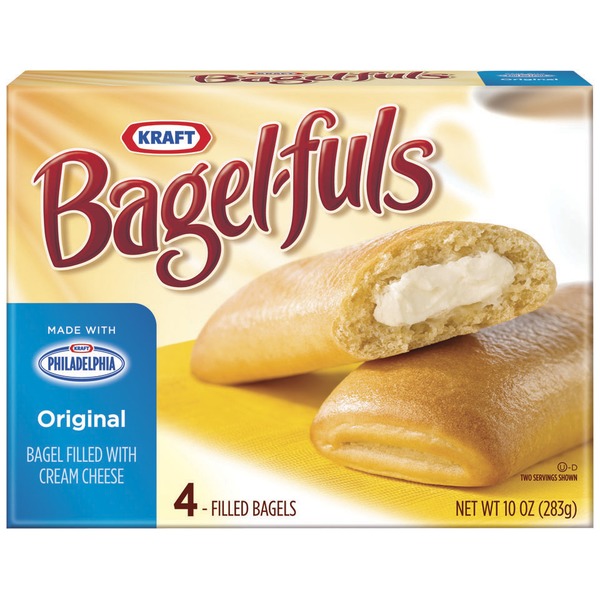 I asked the kids what’s for lunch. As the meal was still hidden under its patterned plastic wrap, they too were still pretty clueless. All I could see was that there was something wrapped in cellophane with writing on it under the plastic wrap. I soon learned that brunch consisted of two turkey sausages lying on the bottom, appearing quite naked or a tad underdressed if you ask me, a hash brown square, and on top a squished Bagel-ful. Do you have the full picture–or are you stumped because like me you have no idea what a Bagel-ful is?

A Bagel-ful? I did not make this up. Subsequent investigation revealed that apparently Kraft has been marketing this for a few years now and I think you can actually buy these in stores. If you don’t know what a Bagel-ful is, it is a processed rectangular dough product injected with Philadelphia Cream Cheese.

Blasphemy! Is there not some standard of identity for a bagel? Is not a bagel by definition a boiled heavenly dough formed into a circle thereby having a hole in the middle blessed by some senior rabbi and ordained by God? Is a claim of propriety by a food manufacturer not something akin to idol worship? And, isn’t there some omniscient understanding that we should not be serving such meshuggah to children in our schools? How is this for product placement Morgan Spurlock? Is this an example of cost containment in our school lunch programs? Not to mention that the Bagel-ful got heated up in plastic?

Pondering the composition of this meal, I wandered the lunchroom. I think the kids are on to me. Some may be a little suspicious but very deep down I think they know I have their best interests at heart–so they are usually pretty friendly and quite adorable when I stop to chat with them about what they are eating. Today, a kid who chose a turkey sandwich instead of a hot meal asked me to help him to free the sandwich from its plastic bag. It was a good thing I was there. The tie thingy was the kind you can’t undo and you just have to brutally tear the plastic from its tight grip.

My market research showed that a number of kids thought the Bagel-fuls were nasty and did not eat them. However, other kids then asked those kids if they could have it instead. Oh well. The good news is the apples looked good and seemed to get a 100% approval rating. I wonder who made them.

4 thoughts on “a shmear campaign”