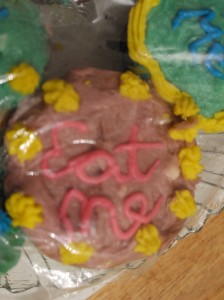 As I leaned over to pick up the box on the chair, the already strained cardboard gave out and the books that it contained went tumbling all over the floor. So, there I was on my knees scrambling to pick up the books while my guests waited awkwardly in the cramped doorway looking down at me.

The day before, I moved into a temporary office in the basement of the Health Center, as my regular office was about to undergo renovation. It was now the first thing in the morning, my new office was still in serious disarray, and my computer told me that my first client had arrived. Though I do usually try to get a glimpse of some history before going out to greet my clients, I did not then have a chance to do so.

I climbed the stairs which brought me face to face with the people in the waiting area and called my client. Two women stood up and followed me back down to my office. I quickly learned that one of them–my client–was developmentally disabled, and the other was her case manager from the group home where she lived. Arriving back at my new space, I realized I needed to empty a chair so that they would both have a place to sit–and that was when the box of books broke.

I stood back up, welcomed them, tried to glean some history from the medical record as well as the case manager–but never fully regained traction. Frances was a thirty-year-old woman with bright eyes, nice teeth, high tight little pigtails, and a child-like demeanor.  And yes, she was plump.

Right off, she scanned my office with radar-like precision and asked me if I had any cookbooks. The case manager’s eyes widened in surprise. I asked her if she ever had the opportunity to cook. She said no, but that she really wished she did and still thought it would be nice to have a cookbook. I asked her what she would like to cook. She replied cakes, sausage and, macaroni and cheese. Always willing to oblige, I did manage to find a copy of a cookbook I sometimes give out that makes healthy revisions of common comfort food recipes. I read out the names of the listed recipes with enthusiasm. Her mood quickly deflated. Devil’s Food Cake or any other such confection was not mentioned. Still, she agreed to take the cookbook anyway–and said thank you.

I then saw she was a diabetic and was told that her blood sugar was tested two times a day. Frances and her case manager described some rather high blood sugar results, especially in the morning. I learned that she ate meals prepared at the group house, at the day program that she attended, and out at local food establishments. Seeking and procuring food was a frequent activity and overeating a common occurrence. I asked if she knew that being a diabetic meant that she would have to be mindful of eating sweets. Plaintively, she said yes. She went on to explain that when people tell her to not eat sugar she gets very angry. She informed me that she has an anger problem that she is working on, but this type of control provokes her.

She went on. Her father always gave her sweets when she was young, that’s just how she was raised and that’s why she likes sweets. Eating makes her happy. Yes, sometimes her stomach hurts if she overeats, but that doesn’t feel as bad as the emptiness she experiences when she can’t eat what she wants.

It was my turn to be deflated–the dilemma hit me smack in the face–once again. I was in the presence of a truth sayer. I just wanted to hug her and tell her yeah, it’s ok–lots of people are really angry at being told they can’t have their cake. Marie Antoinette might actually be a popular figure in this current milieu.

The next visit with Frances was not fraught with technical difficulties, but the story grew. When I asked the casual question, “How are you?”, she responded that actually today she was feeling rather sad. And, she added, she didn’t really like the cookbook I gave her. Ah, it was the early reminder I needed that I was with someone who did not cover thoughts or emotions. Being with someone like that brings a stark frankness to each moment. It heightened the consciousness that I was possibly apt to be benignly disingenuous or perhaps condescending.

This time she quickly eyeballed a colorful booklet sticking out on my desk that shows how many calories and grams of measurable nutritional components are in various fast- foods. I barely remembered it was there. We explored her eating, and I heard what I already knew, that her breakfasts–as is true for many, including those who are institutionalized in some capacity–consist of lots of pancakes with syrup, sugary cereals, bagels, and fried meats. It is a lot like a breakfast buffet at a hotel but on a daily basis.  She eats what is served and is aware that she eats even more of the tastier offerings. And, it is then, without prompting or apology, she says, “And I binge, because I realize I can’t just eat normally like other people can which makes me feel bad–and this is how I respond.”

Many people spend lots of time and money in therapy to arrive at that awareness. Frances understands the crux of the struggle about food. Food gladly serves in the moment to push down all the pain and sadness that is too hard to feel. Despite her clarity, I am not sure how to give her the options, resources, and resilience that she requires.

Despite my subterranean quarters, I look upward as I often do in this work, and ask for guidance. Dear Lord, do not make me show her how many grams of fat in a Big Mac. Must I utter nutritional pabulum or make her eat Bran Flakes? What have you got up there in the way of holy alternative sweeteners? How about a dose of Big Love? Amen. As always, seeking thoughts, reflections, and hugs.