To make bread or give love, to dig in the earth, to feed an animal or cook for a stranger—these activities require no extensive commentary, no lucid theology. All they require is someone willing to bend, reach, chop, stir. Most of these tasks are so full of pleasure that there is no need to complicate things by calling them holy. And yet these are the same activities that change lives, sometimes all at once and sometimes more slowly, the way dripping water changes stone. In a world where faith is often construed as a way of thinking, bodily practices remind the willing that faith is a way of life. Barbara Brown Taylor ~ (An Altar in the World: A Geography of Faith)

On a cloudy and dreary Saturday morning in October, I headed into Albany to catch up with the ever-busy Veggie Mobile in order to get a glimpse of the Veggie Rx Program in action. It had been almost two years since I began administering this program that I had helped establish at the Health Center, and as a concerned mom, it was time for a periodic check-up to see how it was doing. 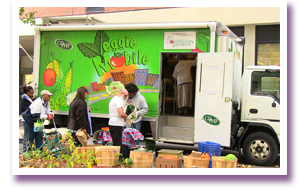 Veggie Rx is a “produce prescription incentive” wherein fruits and vegetables are “prescribed” to medically high-risk patients by their health care providers as a means to encourage healthier diets and to improve health outcomes. Similar programs have begun to emerge in the past few years, and are being considered as a model of a viable public health intervention for disenfranchised communities. This medically-housed approach provides powerful messaging, unique for an institution that traditionally proffers mainly pharmaceutical solutions and well-meaning but often weak recommendations for health behavior change. It affirms, “Let food be thy medicine.”

Veggie Rx was initiated as a collaboration between Capital District Community Gardens (CDCG) (now known as Capital Roots) and the Whitney Young Health Center and is funded by the NYS Department of Health’s Hunger Prevention and Nutrition Assistance Program. It was designed as a pilot to serve fifty persons with diabetes and/or hypertension. Once recruited and enrolled, the participants receive “prescription coupons” valued at $7 each, which can be redeemed once per week on CDCG’s Veggie Mobile. They also receive an additional food bag valued at $4 provided as part of the Veggie Mobile’s Taste and Take tasting program each time they shop.

The bio-diesel fueled, hip-hop pulsing, “produce aisle on wheels” Veggie Mobile which I chatted about in No Passing, toodles around many Capital District neighborhoods most days of the week, year-round. It irrigates identified food deserts by arriving at a variety of community locations where anyone can shop, right on the truck. It is somewhat akin to an ice cream truck except that it hawks an impressive array of fresh fruits and vegetables, much of it from local farms.

I met up with the Veggie Mobile that day in the city’s Arbor Hill neighborhood. Parked at the corner of a side street, it was a burst of color in a rather gray landscape. That brightly painted truck always shows up representing the rainbow, but it is the activity that it fosters that is the pot of gold. Among the customers were two Veggie Rx participants. One was a woman whom I had just enrolled in the program. She was there with her two young granddaughters. ‘Patient with diabetes’ instantly transformed into ‘loving grandma’ as I watched her solicit the girls’ advice for what to choose.

The other was a gentleman who had been enrolled for a while but who had not really participated. I had recently called him to discuss removing him from the program—but he asked for another chance. He explained that he had experienced a host of health problems but was feeling better and really wanted to have this opportunity to improve his diet. Sure enough, there he was like a kid in a candy shop–but instead of candy, he was purchasing a sophisticated assortment of produce.

After an hour at that location, the dedicated Veggie Mobile staff women closed up shop. I hopped in my car and followed them as they got back on and off the highway and made their way over to the next scheduled stop at a low-income housing complex—not too far from the Governor’s Mansion. Arriving there, about fifteen people were already waiting–men, women, and children–including two more Veggie Rx participants. They were surprised to see me and greeted me with smiles and hugs.

This was a busy site, so I assisted with bagging while anchoring myself at a good vantage point. Shopping on the Veggie Mobile begs some patience—but perhaps not any more than waiting in a fast-food drive-thru line. Here though, was connection, community and lots of conversation about good food. There was squeezing back and forth as people reached to add another sweet potato, banana or onion to their order. All forms of “monetary green” (cash, SNAP EBT cards, New York State Fresh Connect, and Farmer’s Market Coupons–along with the cute Veggie Rx coupons) were exchanged for “nutritional green” (collards, kale, green beans, green peppers, and broccoli). It was a beautiful sight to behold.

Despite my sheer love of this program, I am still not sure yet if these incentive initiatives are token, feel-good, short-term experiments–or the templates for a new health and food revolution. Are they worth the effort for the few that they serve? Can they put even the tiniest dent in the massive problem they are trying to solve and might a few fruits and vegetables a week really affect change?

What I  do know is that I have seen Veggie Rx change the behaviors and well-being of many of those in the program. Let me strengthen that. I have witnessed some profound changes. There has definitely been some powerful “medicine” going down. Participants have started juicing, making smoothies, and taken to more plant-based diets. Many have attested to feeling better and have noticeably become more enlivened. While I have also noted improvements in individuals’ health markers (weight, blood pressure, hemoglobin A1c)–to see these markers shift in a significant way for this highly challenged population will take time. I caution not to base the success of these types of programs solely on those indicators–it is too myopic a lens.

Veggie Rx offers more than just food access and is about something greater than fruit and vegetable intake. Relationship building is the true foundation of this program. This power of relationship–between participants and the Health Center and Veggie Mobile staff–is not to be underestimated. Having undertaken an evaluation of this program and through my direct contact with the participants, I know that they feel better valued as both patients and consumers which increases their engagement in both roles. I also know that they consider this program to be a blessing in their lives–those are their words, not mine.

Participation comes with some requirements which asks something deeper of its recipients–like standing out on street corners in the cold, shopping in cramped quarters, finding a specific time and place to shop, and committing to follow-up medical appointments. Not everyone enrolled has taken advantage of the program, but the majority have–and some quite extensively.

As a metaphor for, or a substitute expression of the universal yearning to return to the land, the capacity to access the bounty of the earth perhaps subconsciously reminds us of the connection to our source and our birthright of health. The mere act of showing up and filling one’s bag with beautiful produce yielded from the soil reflects a powerful commitment to one’s self. Standing witness on that morning shed light on what a new paradigm of healthcare could look like–particularly in response to the problems associated with health disparities–but in the larger context as well. I returned home with a reassurance that my little toddler-aged program was doing well. I can’t wait to see it grow.

Related Resources: Food Trust/Policy Link:  Access to Healthy Food and Why it Matters;