I was hoping not to have to work today. It is Sunday and I promised myself a little repose. So there I was actually lounging on the couch this morning when the news of New York City Mayor Michael Bloomberg’s announcement of the New York City Health Department’s Latch on NYC breastfeeding initiative filtered into my airspace from an NPR podcast.

Clearly, the launch of this voluntary program for New York City’s hospitals was timed to coincide with World Breastfeeding Week. The story started off nicely enough with a rational presentation of the benefits of breastfeeding and informed that 27 out of 40 New York City hospitals have already signed on to the recommended policy. But, it then whacked me with a tirade of the backlash (and responses) to the initiative–bemoaning that women do not want to have their parenting decisions enforced, especially by a man–and specifically not by health policy promoting Mayor Michael Bloomberg.

I rolled over and groaned into the cushions. My hopes for a relaxing day were shattered. I intended to glue my attention to the Olympics–one of the rare times I surrender to watching TV– but this report was going to interfere. Having discussed the topic of breastfeeding previously, I had no choice but to respond to this in a timely manner. Water polo and volleyball could wait, but this must be addressed before track and field and gymnastics takes to the screen.

In brief, Mayor Bloomberg did not make up these policies, and in fact, they are not mandated. These are recommendations consistent with the guidelines of the Baby-Friendly Hospital Initiative. Other larger jurisdictions have already implemented these policies. The intention is not to take choice away from women or to impound life-giving nourishment. It will not send women back into the kitchen chained to the stove with babes pulling on the teat as some editorials that I read implied.

Instead, it is a long-overdue remediation of a situation that separated the human species from their species-specific milk and compromised in both subtle and profound ways the health of many moms and babes. The superiority of human milk, as compared to artificial milk or formula, for human babies is not disputed and its immuno-protective properties are well established. There are many other benefits as well of mother’s milk as a substance and breastfeeding as a method.

What is not as well-known is that formula companies have participated in the disruption of this mother and child feeding relationship for many years and that this has promoted a cultural ignorance about the benefits of breast milk and a communal lack of wisdom regarding supporting women in this most natural of human behaviors. Big corporations have been the beneficiaries of immeasurable profits by influencing infant feeding using extreme measures by literally getting invited right into the hospital.

Pregnant women are wooed with coupons, samples, and free merchandise. New moms are given goodie bags with loyalty promoting formula brands. What formula a baby is started on has nothing to do with the baby or the doctor, but by whatever company got their hands on those tiny sucking lips first. Where else does this marketing intrusion occur so blatantly in matters related to health?

Women’s efforts to nurse have been sabotaged in hospitals for decades by babies being given sugar-water or formula without consent. Birth attendants including doctors and nurses not educated in lactation have also impeded the mother’s success at nursing. The result is a society that for decades has been led to believe that nursing is difficult, inconvenient and an impediment to maternal freedom. What has created barriers for mothers choosing to nurse is not nursing, but a lack of education, limited support, pathetic maternity leave policies, lack of comfortable places for nursing and pumping and a prudish culture that has turned to feed at the breast into a lascivious act aggravated by laws that even make nursing in public illegal in some places.

If you wish to discuss enslaving factors as regards women’s choices, this is what people should be concerned with–not the new policies. Of course, there will be some situations where babies will require formula, and there will be women who will choose formula feeding for a multitude of reasons. But, I am pretty sure the locked cabinet that the policy suggests will not be in the hospital basement by the janitors’ supplies and that women won’t be found dragging their IV poles down the hall in desperate search of a contraband formula to sate their starving babies. And, I strongly doubt that nursing staff will be utilizing methods of intimidation to enforce breastfeeding.

This is just an opportunity to fully educate and inform and to take the profits out of our babies’ bellies. It is one of a long series of efforts by many health care professionals to enhance the health of women and children in both the short and long-term. This is not rocket science nor is it evidence of a nanny state. If we as mothers have to choose our battles–this is not the one to wage.

Related Posts: Blessed Feeding; To She Who Loves Us; A Winning Goal; Breastfeeding Redux 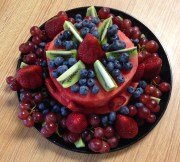