I actually found it in a garbage can at the Health Department where I now work. I’d been trying to get my little fingers on one of these for a while, so I was not totally put off by its lowly circumstances. It really should have been in the recycling bin at least, but there it lay, abandoned, thankfully, right on top. I gingerly lifted it from its resting place of refuse and walked it right over to a nearby sink.

I unscrewed the cap which I was about to discard until I noticed that it too was an artifact of interest to me– but that was secondary to the bottle, at least for starters. The bottle was still half full or half empty, so my next quasi-distasteful act was to pour the hazardous saliva-mixed remains down the drain despite my uncertainty regarding proper disposal procedures for what might be considered a toxic substance.

A few months back I had become aware of some new Coca-Cola campaign entitled Share A Coke. Cans and bottles of the ubiquitous beverage now have one of about 250 first names, like Debbie, along with other emotionally tinged monikers like Bestie, Grillmaster, Wingman, Mom and Dad prominently displayed on the label under the directive to Share a Coke with the dearly imprinted. Just hearing about this manipulation of the human psyche triggered my shivers down the spinal reflex. But, when I began to see the bottles for sale in my local convenience store and in the cafeteria in my office building it was downright spooky. But, here I was now, up close and personal with one.

Things must have been getting pretty bad over there at Coca-Cola. Previous promises of perpetual happiness associated with imbibing the sugar-laden, highly acidic, caffeine-laced, teeth-rotting, gut-deteriorating, illness-promoting fizzy elixir must have begun to go flat. Were sales lagging? Was the logo no longer recognizable the world over? What else could have initiated a marketing blitz that reeks of malevolence as it strives to ensnare our fragile egos and enslave our purchasing behaviors?

I remember being excited when those little mini license plates with names on them that you could attach to your bike seat first came out. But, I also recall the immediate chagrin when you could not find your own name hanging from the metal display rack. Suddenly you felt second-rate, not worthy of a plate. I am not certain of all of the psychological underpinnings that are attached to this probably billion-dollar campaign, but I am sure they are many. Does seeing our name emblazoned in such a public way make us feel validated, loved, powerful and more connected in this alienated world?

I don’t really get the campaign. I am sure, most of the time, you have to buy a bottle with someone else’s name on it. How much can you bother to search for a bottle that idolizes yourself or a loved one? Must you settle for John when you are really seeking Mario? And then, what if you don’t have a person to share it with? That is probably what happened to my bottle, Nicole. Half-finished and tossed aside, unshared and hopes dashed. Even the reward points offered on the cap were left unclaimed and discarded. Reward points? Really?

I don’t want to go any further on this except to say that this unbridled assault on our health through such methods of aggressive advertising can and does bring me to tears. I’ve written about this before. One does not have to look too hard to see the real rewards of such consumption, but you have to care to be looking and looking to care. I am too verklempt even thinking about needing to reiterate the effects of these substances anymore.

Originally, the reason I wanted to get a bottle without purchase was to be able to include it as a photo for this post–but now I don’t even wish to give it any publicity or visibility. We are clearly easy targets for seduction even when clearly it is not in our best interest. So, Nicole will now go directly into my recycling bin and instead, I am posting a photo of a box of tissues. My only hope is that an unexpected outcome of the campaign will be that with all that sharing of cans and bottles, per capita consumption will actually shrink by at least half.

Anyway, while there are sad tears there are also happy ones. I specialize in both. Recently, while also at work–it may have even been the same day that I retrieved the Coke bottle, I received an email from the Alliance for a Healthier Generation. It included a video that spotlighted healthy and healing practices being undertaken at the West Side High School for at-risk students in New York City through a powerful investment in a gardening program, real food, and intensive physical activity– by a dedicated and devoted principal and staff.

Thirty-six seconds in and there I was bawling (yes) in my little, oh not so private cubicle. In my last post, Childhood Awareness Month Obesity, I wrote about my reservations about the bulk of nutrition and health activities being directed at obesity prevention efforts whereas I believe the implications and consequences of our cultural dietary and health insults are so much greater. I did not get much response on that so I would still be interested in hearing your thoughts. But, in this video, simply and beautifully, a young woman named Tenia expresses why eating proper foods is important for both emotional and physical well-being–aside from weight-based associations.

This glimpse of transformation that occurs when the birthright of health is granted, when it is given priority and nurtured, and not compromised by those so willing to sacrifice our young in an endless pursuit of profit is worth viewing. I highly recommend it. Here is the link. Note, don’t forget the tissues.

Just a mention that my own recent favorite brew has been matcha, a fine green tea powder. I enjoy it as a tea or mixed in smoothies. It is fuller or richer than regular green tea and it gently provides a touch of focus and energy. I was initiated with a gift of a package of Matcha from Kiss Me Organics that was exceptionally pleasant and which has become a welcomed part of my day and my diet. There are many benefits of matcha to explore and it can be incorporated into many recipes. Give it a peek. 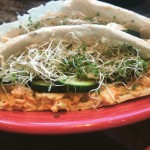 To reprimand the sinner

Than change the system.

5 thoughts on “brought to tears”